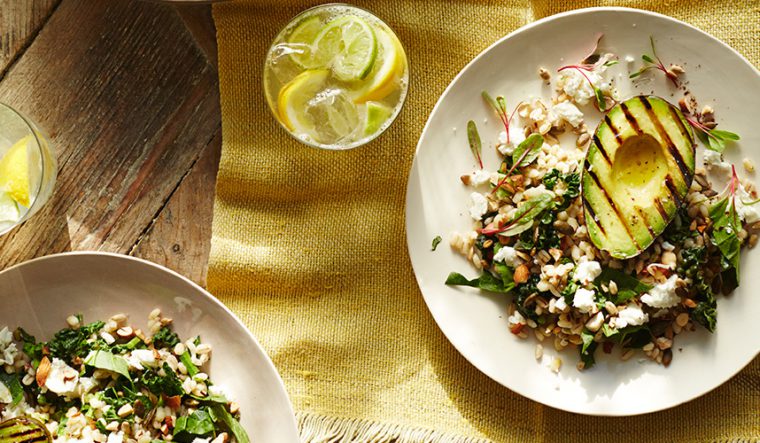 Grains and so called pseudo-grains like quinoa and amaranth (which look and cook like grains but are actually seeds) are a big part of how I like to eat, but quite a few of them take a while to cook, so I like to cook them in big batches and have them in my fridge or freezer to have to hand for whenever I need something quickly.

Eating a range of grains means that you are introducing a wide spectrum of vitamins and minerals into your diet.

These days you can also buy packets of pre-cooked grains in supermarkets and delis, though they vary wildly in quality and in what has been added to them. Some brands, like Merchant Gourmet, are pretty reliable and have very little else added – if you check the packet carefully these can be a good option if you are in a fix.

SOAKING
These grains and pseudo-grains, like pulses and nuts, will benefit from soaking. It will speed up their cooking time, maximise their nutritional value and make them easier to digest. An overnight soak in double the amount of cold (ideally filtered) water is ideal, but a couple of hours is good too – and if you don’t have time it’s not the end of the world.

COOKING
Drain your soaked grain and put into a large pot with the specified amount of liquid. I cook all my grains in vegetable stock, which adds flavour and depth. I often also squeeze the juice of a lemon into the pan, then put the squeezed halves into the pan while the grain cooks to add extra flavour. Cook until tender.

STORING AND FREEZING
Drain your grains and cool well – if you want to speed this up you can cool them on a couple of baking trays. They can then be stored for 3–4 days in the fridge, or frozen in portions for super-quick dinners.

QUINOA – RED, BLACK AND WHITE
You’ll need 2 mugs of water to 1 mug of quinoa. I like to dry toast my quinoa in a pan before cooking until it starts to make a popping sound – this adds a deeper, toasty flavour. Cook for about 12 minutes, until all the water has been absorbed and the little curly grain has popped out. I like to keep the pan on the heat until I can just hear the popping sound again, to make sure all the water is gone.

BROWN RICE
Rinse your rice under running cold water. For 1 mugful of rice you’ll need 11⁄4 mugs of water for long-grain and 11⁄2 for wholegrain. Bring to the boil, then reduce to a steady simmer and cook for 30 minutes, until the rice is tender. Drain and leave in the pan to steam for a further 10 minutes.

AMARANTH
You’ll need 21⁄2 mugs of water for every mug of amaranth. Bring to the boil, then simmer for 20 minutes until the grains are fluffy and the liquid has been absorbed.

BUCKWHEAT
Buckwheat comes in two forms: kasha, which is toasted, and buckwheat groats, which are untoasted. I usually use the raw groats. First rinse your groats under running cold water until it runs clear. Then you’ll need 2 mugs of liquid for each mug of groats. Bring to the boil, then simmer for 20–30 minutes, until tender, 15–20 if you use toasted buckwheat or kasha. If you like, you can toast the groats yourself, in a dry pan for 1–2 minutes until they smell nutty.

MILLET
You’ll need 21⁄2 mugs of water for every mug of millet. Bring to the boil, then simmer for 25 minutes until the grains are fluffy and the liquid has been absorbed. Fluff up with a fork. You can toast millet to add a nutty flavour in the same way as quinoa.

FARRO
You’ll need 2 mugs of water to every mug of farro. Bring to the boil, then simmer for 30 minutes, until tender. Farro contains gluten.

PEARL BARLEY
You’ll need 3 mugs of water to each mug  of barley. Bring to the boil, then turn the heat down and simmer for 45–50 minutes, until tender. Pearl barley contains gluten.

FREEKEH
Freekeh is immature wheat that is harvested while still young and soft, then roasted or sun-dried. The health bonus of harvesting immature wheat is that it retains more of its nutrients and proteins than its fully-grown counterparts. It even claims to have fewer carbohydrates than regular wheat because it’s young.

Wash the grain first by swirling in water and rubbing the grains together vigorously. Drain and repeat until the water is clear. You’ll need 2 mugs of water for every mug of freekeh. Bring to the boil, cover, and simmer until the water is completely absorbed (about 15 minutes for cracked grain and 45 minutes for wholegrain). Remove from the heat and use a fork to fluff up.