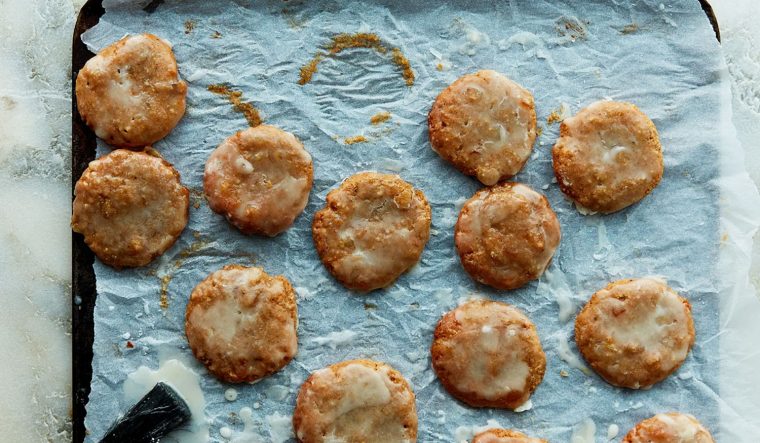 This year I consulted the queen of German cooking, Anja Dunk, for some lebkuchen tips, and I think I’ve just made the best batch yet. These little biscuits are traditionally made at the end of November, then stored until Christmas (they have no butter, so they keep). But I am never that organised, so I make them in the days before Christmas Eve. The authentic recipe for lebkuchen suggests chilling the dough for at least eight hours before baking, to ferment it slightly, but if you don’t have time, these work well after 30 minutes.

Beat the egg and sugar with an electric whisk until the mixture is pale and thickened. Add the remaining ingredients, apart from the filo or rice paper, (measure out the honey on a lightly oiled spoon to make it easier to handle). Mix to combine, then wrap the mixture and chill for at least half an hour – preferably eight hours.

Divide the filo or rice paper circles between two baking sheets. Measure out spoonfuls of dough, about 15g each, roll between your hands to form balls, then press them down flat to fit the circles. Bake in the middle of the oven for 12 minutes, until just golden.

Meanwhile, make the icing. Mix the icing sugar, honey and orange juice to create a runny, creamy glaze. You can make this ahead but you might need to loosen it just before you paint it on to the biscuits.

Once golden, remove the biscuits from the oven and paint the tops with the glaze right away; you want to cover the top of the biscuit. Leave to cool on the tray, then serve or store in an airtight tin for up to a week.

Hi Anna, these are my favourite biscuits! Is there anything I could substitute for the egg to make them vegan? (The honey I know how to swap!) Thanks in advance xx