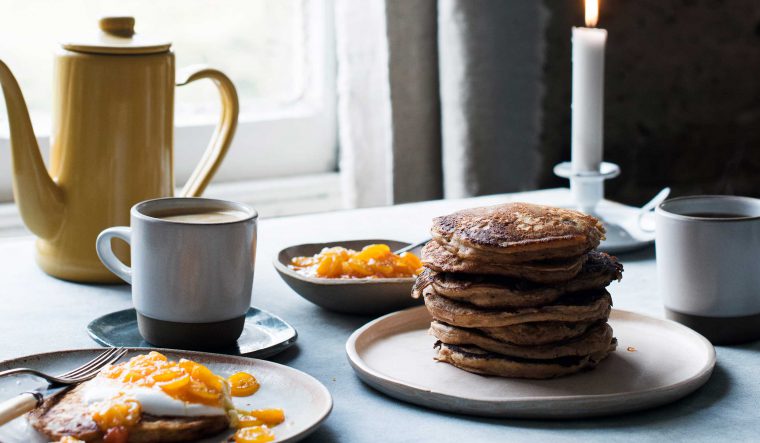 For me, the joy of any roast are the leftover roots and greens, that can be fried up until deeply golden and crisp, then served topped with a fried egg and a spoonful of a punchy chutney. I love a Christmas-dinner sandwich, too: stuffing, greens, roasted squash and a slick of cranberry sauce between two slices of bread. It’s a once-a-year thing, taking stodginess to the next level, but it’s a mark of the season, and I always eat one or two with glee.

Here are some of my favourite ways with leftovers:

This all happens in half an hour in the pan. It’s also a great way to use up leftover, cooked root vegetables, which would make it even quicker. If you are vegan, skip the cheese and eggs and use 100 g of soaked cashews blended with 100 ml of cold water in place of the yogurt. I make this for my family a lot, and it’s really good this way, too. 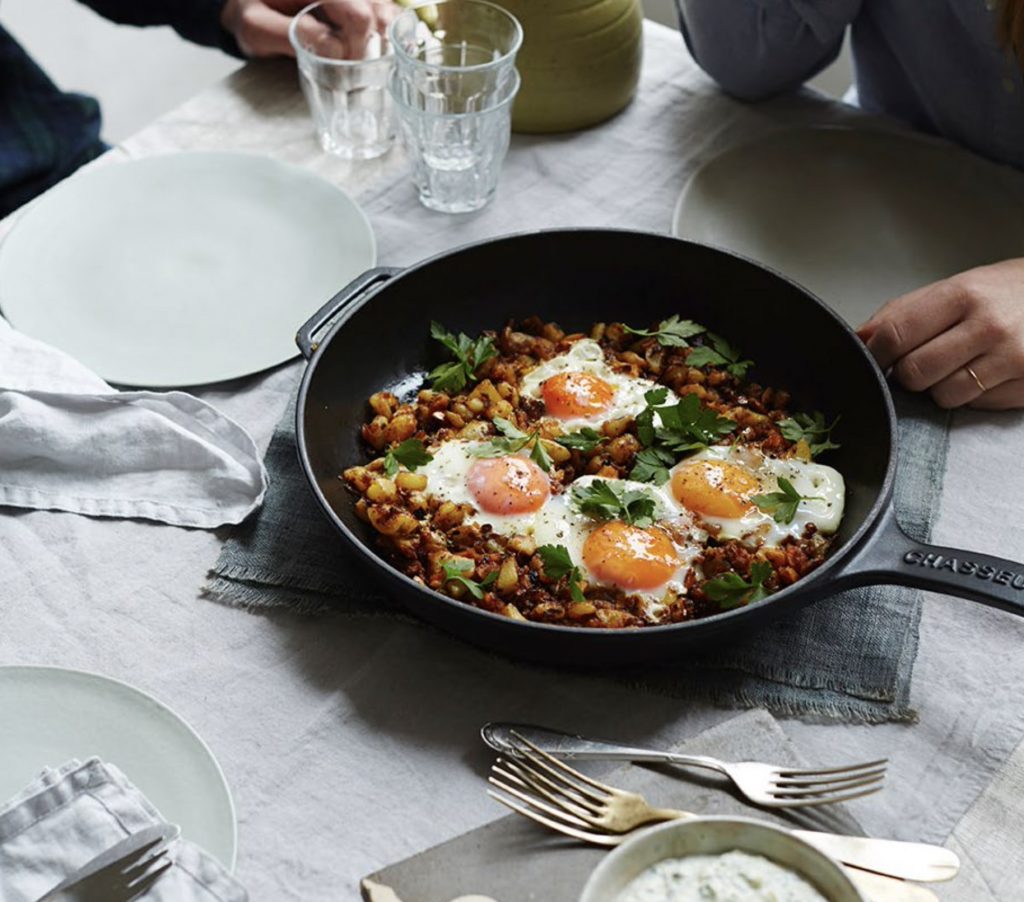 If your house is anything like mine, the fruit bowl heaves with clementines. I can’t get enough of them. This quick compote is a good way to use any lingerers. I add a pinch of saffron for its sunshine colour and warming flavour, but a couple of cardamom pods or a pinch of cinnamon would work as well. This is half compote, half marmalade and is wonderful served alongside some roughly chopped nuts – or even chestnuts, if you have any left – atop the golden ricotta pancakes.

ALL HAIL THE KALE SALAD

Basically everything is better with a crispy breadcrumb topping: cauliflower cheese, roast veg, pasta bakes, salads, soups, even some cakes. If the dish is going to be baked, toss your breadcrumbs with salt, pepper, olive oil, herbs and citrus zest, if you like, and scatter over whatever you are baking. If not, make a topping: fry the breadcrumbs in olive oil, then season as above. For a sweet breadcrumb topping fry in a flavourless oil then add a splash of honey/maple syrup and a pinch of a spice (like cinnamon) to sweeten.

This is based on the kale salad from Joshua McFadden’s book Six Seasons, which claims to be the salad that started a worldwide trend for using kale as a salad leaf. I actually use cavolo nero, sometimes known as lacinato or Tuscan kale here, but curly kale would work really well too. 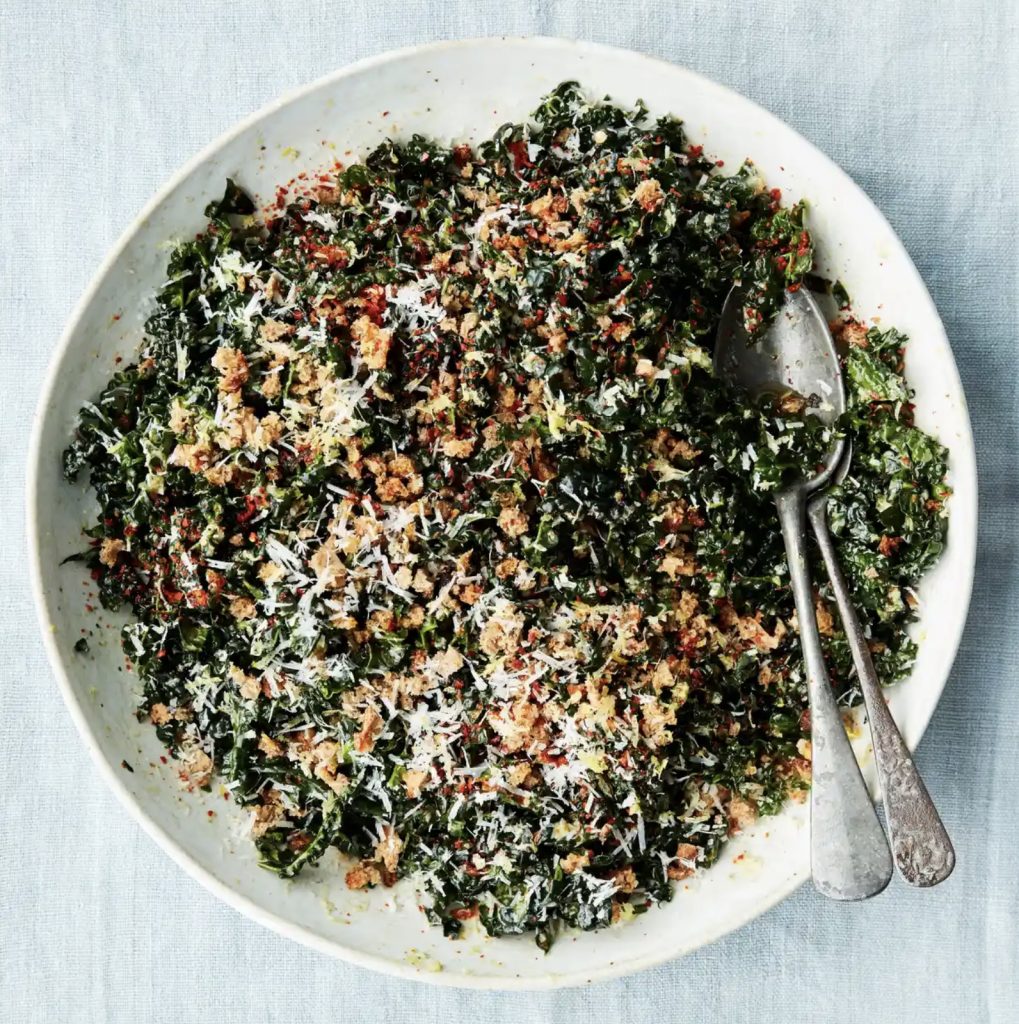 This is the kind of hearty dinner that befits a winter evening, but instead of a heavy butter laden pastry top I’ve opted for a savoury crumble topping. It’s much lighter and super easy to put together. This pie is hearty, creamy and tasty but won’t leave you unable to get up from the sofa as it’s veg-packed and topped with seeds and wholegrains.

Back in India it was originally a vegetarian dish of lentils and rice; the smoked fish and eggs were only added to suit British tastes. I like the mix of smoke with the spice, so I roast celeriac with smoked salt and stir it through; I use Anglesey’s Halen Môn smoked salt, but if you can’t find it, normal salt will do. I keep my eggs pretty runny, but if you like them firm, boil them for another minute or two.