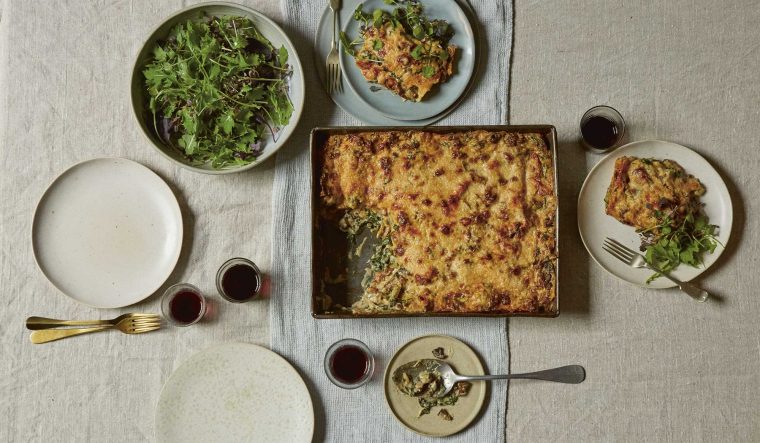 This roast kale lasagne recipe is based on the delicious Vincisgrassi, a mushroom lasagne that hails from the Le Marche region in Italy. The authentic Vincisgrassi uses the smokiness of Parma ham. I didn’t want to stop eating this dish, one of my most craved, when I stopped eating meat, so this is topped with some oven-roasted kale instead and an optional dash of smoked water.

If you like it you can also add truffle oil; personally I am not a fan, but I know it is well loved so I will leave that decision up to you. I use a mixture of wild mushrooms like girolles and porcini, along with some more substantial ones like chestnut or portobellos.

Vegans can make this using dried pasta sheets, which are usually made without eggs, and almond milk, a dairy-free butter and vegan Parmesan. This may sound like a lot of changes but it works well, and I make it this way for the vegans in my family often.

Cover the porcini with 200ml of boiling water. Clean your mushrooms, using a brush or damp kitchen paper to dust off any dirt, then tear or slice them into bite-sized pieces.

For the béchamel, heat the milk in a pan with the onion, bay and peppercorns until boiling. Remove from the heat and leave to infuse for 30 minutes. Strain through a fine sieve into a jug and set aside for later.

Next cook your mushrooms – you will need to do this in a couple of batches. Melt half the butter in a large frying pan over a very high heat and add a splash of olive oil. Let the pan get nice and hot, then add half the fresh mushrooms and cook, moving them around the pan, until they are browned and crisp (about 5–7 minutes).

Season with a pinch of salt and remove the first batch to a large bowl. Put the pan back on the heat, add the rest of the butter and a bit more oil, and cook the rest of the mushrooms.

Once the second batch is golden, drain the porcini, keeping the soaking liquid, then roughly chop them and add them to the pan of mushrooms along with the parsley. Stir together and tip into the bowl with the rest of the mushrooms.

Now back to your sauce. Melt the butter in a heavy-bottomed pan, add the flour and mix well, allowing it to cook for a couple of minutes so the flour loses its rawness. Take the pan off the heat and add the milk bit by bit, starting with small drops and stirring well with a balloon whisk to prevent lumps forming. Once you have mixed in all the milk, stir in the porcini soaking liquid and put the pan back on the heat. Bring to the boil, stirring constantly – the mixture will thicken.

Simmer for 3 minutes, then stir in the smoked water (if using) and the parsley and mushroom mixture and heat gently. Taste and season with more salt and pepper if it’s needed.

In a bowl, scrunch the kale with a tablespoon of olive oil and some salt and pepper and mix through the sauce too.

Preheat the oven to 220ºC/200ºC fan/gas 7. Butter an ovenproof dish (about 20 x 30cm). If you are using dried pasta sheets, boil the pasta in salted water according to the packet instructions. If you are using fresh, cook the sheets in boiling water for 2 minutes, cooking 4 squares at a time and assembling the dish as you go.

Start with a layer of pasta, then sauce, then a sprinkling of Parmesan and keep going, building up the layers until you have used all the pasta sheets, and finishing with a layer of sauce and Parmesan. Bake in the oven for 25–30 minutes, until golden brown on top and bubbling. Drizzle with truffle oil if you like, and serve with more Parmesan and some green salad.

How would you modify the recipe if using dried lasagna noodles? It sounds delicious!

Can I make smoked water? If not, how do I obtain it?

Dear Anna (or colleagues),
for the smoky flavor you used oven-roasted kale (and optional smoked water) you say in the introduction. In the recipe explanation the kale doesn’t get roasted. I don’t have smoked water. Does it still get a smoky flavor then?

Could you freeze leftovers?

Hello,
I am wondering if you have a translation recipe of this exact one in U.S. conversions? Thank you so much!