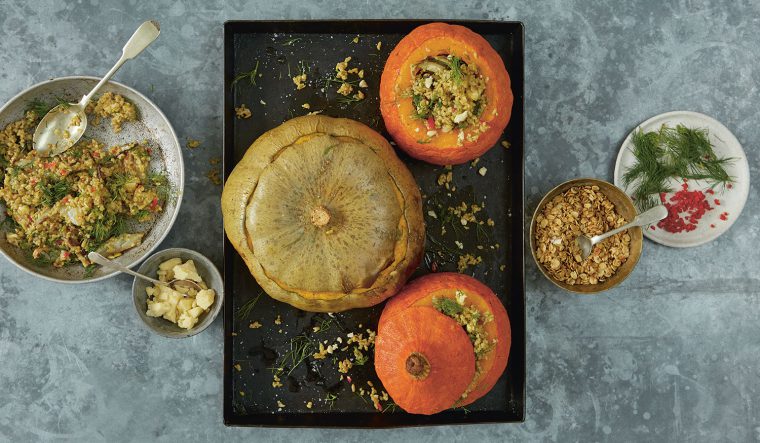 Roast squash is something that I have returned to after a few  years of avoiding it. Along with the other vegetarian stalwarts of mushroom risotto and stuffed peppers, there was a time when roast squash was the offering of choice and it got a bit boring. This recipe has me welcoming roast squash back with open arms, thanks to two things: firstly its very British flavours – there’s not a pomegranate in sight; and secondly how it’s cooked. I roast the squash until it’s completely cooked before stuffing it, making sure that it is crisp inside and out and the filling is well seasoned and light.

This is a wonderful way to use some of the more unusual varieties of squash. I use onion and kabocha squash here, filled with plump grains and sweet roast fennel, some good sharp Cheddar, and topped with toasted buttery oats. A butternut would work too, though you won’t get quite as much of a hollow for stuffing. If you are using a butternut, cut it in half lengthways before roasting to make it easier to fill. Most squashes will roast in roughly the same time, with the exception of the thick-walled pumpkins; I’d avoid those.

a mixture of round whole squashes, about 750g squash per person
4 bulbs of fennel
1 bulb of garlic
olive oil
250g freekeh or pearl barley
125g sharp Cheddar or other cheese
the zest of 1 unwaxed lemon
a bunch of fennel tops or dill
1 red chilli, deseeded if you like
a knob of butter
50g rolled oats or barley flakes
1 teaspoon fennel seeds

Use a big, heavy knife to cut off the base of each squash, so they sit upright on a tray. Cleanly cut about 3–4cm off the top of each one in a single piece (you are going to put the tops back on). Use a metal spoon to scoop out the seeds and the fibres until you have a neat hollow.

Trim the fennel, removing any tough outer leaves, then cut the bulbs into a few big wedges.

Put the squash into a large roasting tray or two. Scatter the fennel wedges around and put the bulb of garlic in too. Drizzle the lot with olive oil, making sure you get inside the squash, and season with salt and pepper. Pop the tops back on the squash. Roast for 45–60 minutes, or until the squash are tender and the fennel has started to soften and brown. If your squash take a little longer, you can remove the fennel once it’s nicely soft and brown, as you don’t want it to overcook.

Meanwhile, put the freekeh or pearl barley in a medium pan and cover with cold water. Add a big pinch of salt, then bring to the boil and simmer until al dente (about 12 minutes for freekeh and 25 minutes for pearl barley). Drain and transfer to a large bowl.

Remove the garlic and fennel from the roasting dish. When cool enough to handle, squeeze the roasted garlic from its papery skins into the freekeh. Roughly chop the fennel and add it to the bowl along with the cheese, lemon zest and some salt and pepper. Chop the fennel tops and chilli and add these too. Taste the mixture and adjust the seasoning, if you like. Divide the mixture between the squash and return them to the oven for 10 minutes.

Meanwhile, heat the butter in a small pan, and add the oats, fennel seeds and a little salt and pepper. Stir to coat in the butter, then toast the flakes until golden (this will take about 5 minutes). Drain on a plate lined with kitchen paper.

Once the squash and freekeh are out of the oven, take the tops off the squash and sprinkle over the toasted oats. Place in the middle of the table for everyone to dig in.

Hi Anna – this looks great. Do you think I could remove the cheese without too many problems? Thanks

Interested to know response to question about the cheese, as I’m wondering same thing.

Should be fine to remove the cheese, absolutely