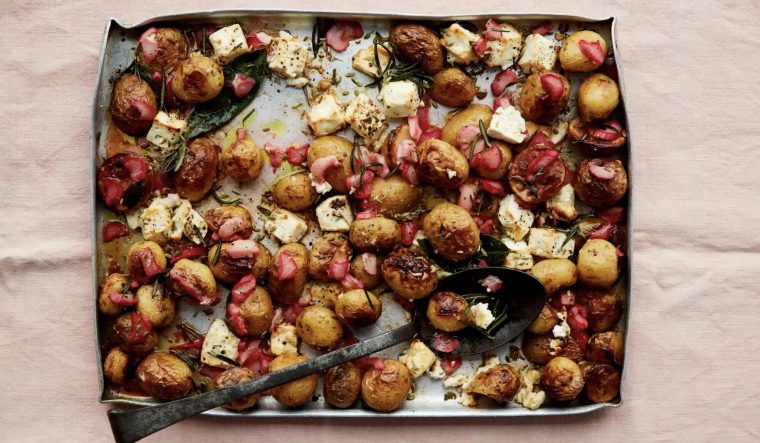 The just-sweet, slightly acidic character of rhubarb works so well here. It’s a painting of a dish, which I finish off with some buttery toasted oats and almonds. Serve this in its baking tray on the table for maximum effect. Vegans could use firm tofu in place of the feta, maple syrup instead of honey, and olive oil for butter.

Heat the oven to 220C/425F/gas 7. Cut any large potatoes into halves or quarters, and tumble them into your largest roasting tray. Add a good pinch of salt and pepper, most of the rosemary, the bay and fennel seeds. Mix the vinegar, honey and three tablespoons of oil, and pour half of it over the potatoes, saving the rest for later. Toss everything together to coat the potatoes, then roast for 25 minutes, until they are beginning to turn golden.

Once the potatoes have had their time, take them out of the oven, add the feta and rhubarb, gently toss to mix, and roast for another 15-20 minutes.

While this cooks, heat the butter in a frying pan with the remaining rosemary and add the oats, chopped almonds and a good pinch of salt. Move everything around the pan until the flakes are golden and smell buttery and toasty, then transfer to a bowl to cool.

The bake is ready when the rhubarb has softened but is still holding its shape and the potatoes are burnished and crisp. Pour the rest of the honey dressing over the tray and toss to coat everything. Sprinkle the oats over the top and serve in the middle of the table with some greens.

IMAGE: Matt Russell for The Guardian

Made this last night – amaaaazing!